At the club I help to run I started this week what I hope will be a regular coding session using Python and, of course, the Mu editor. I'm competing directly with the regular football slot, so I'm not expecting to get many lads. Yesterday I had three Year 8s.

They were at different levels of beginnerhood and I had the usual range of problems getting everything up and running, starting from the fact that the room I'd hoped to use was occupied by older boys as an overflow changing room. Anyhow, we had a good session, created a simple fizz-buzz game and spotted a couple of minor bugs in Mu itself. With their parents' permission I hope to get them onto Github so they can follow the progress of "their" bugs. 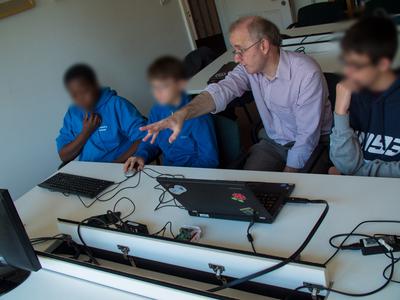 Really through force of circumstances we ended up doing a sort of paired programming. What you can see in the picture is everyone using the one computer (my laptop). We attached a screen and a keyboard and the lads on my right (your left) are using those, while the other lad is using the laptop itself. I'm glad to say that they quickly got used to the discipline of leaving the keyboard for the pilot only with the various co-pilots just chipping in to spot problems. It ended up being not unlike the Sabotage activity which @teknoteacher advocates.

In spite of the Raspberry Pi on the table, we're not using an RPi. The lad on my left is already a Linux user and the lad on my right was keen to understand how he could use Linux and whether a RPi could replace his somewhat underpowered laptop. Depending on how things look I might start using an RPi next week.

I'd hoped to try out the Kano Pixel Kit which we were given at the recent Mu Moot, but I didn't have enough time to prep up for that, so hopefully next time...