The first Thursday in September saw us back at one of our long-time hosters: the Bank of America (BAML). This time, in their building near St Paul's. We've been there once before, for a Raspberry Pi-themed Dojo. That time we were in a sort of banqueting hall on the ground floor. This time, we started at the other end, on the rooftop for generous amounts of pizza, beer and other hors d'oeuvres, before moving into a conference room for the meat and drink of the evening: coding. 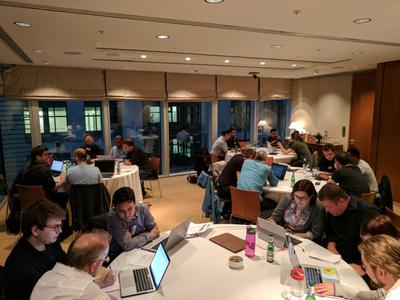 Gautier and others from BAML had prepared a challenge which involved determining the (human) language of a set of texts, given a training corpus. They'd suggested the possibility of using scikit-learn and the Natural Language Tookit, but left it open to teams to find their own way.

One thing about the London Python Dojo is that we emphasise the need to welcome and encourage newcomers, both newcomers to this particular forum and newcomers to the language itself. Early in the evening, Gautier arranged some reshuffling so that more experienced Pythoneers weren't clustered together, leaving neophytyes to flounder alone. So across the table from me was Nathan, giving a Psychologist her first real taste of Python, she having had no more exposure than reading the tutorial for a while.

I was asked to help two developers who were experienced in other areas but new to Python. We stuttered along for a while trying to understand the Natural Language Processing toolkits at which none of us had any knowledge. But we soon decided to switch to more primitive techniques of frequency-matching. Since both of my other team members were new to the game, it was more a question of walking them through the kind of approach, and getting to a simple point of recognising one language from a well-known marker. But they both managed to get that far.

Thanks, as usual, to BAML for its continued support of the London Python Code Dojo. I'm glad to say that a number of organisations have come forward in answer to my call for support to offer their venues for this year's session of Dojos. But we can always use more: if your company is in a position to offer space for about 30 people and, ideally, beer & pizza for the same number, then please let us know: team@ldnpydojo.org.uk or @ldnpydojo on Twitter. 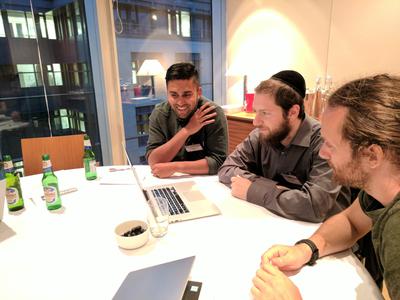